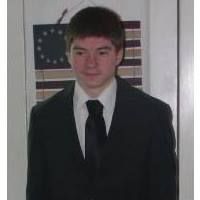 Meet Cody Rupp, PYC Student Leader of the Week! Cody, a Junior at Abraham Lincoln High School, is the son of Richard & Cindy Rupp. Cody has been a model member of PYC for three years. He maintains a level-head, is a critical thinker, and shows dedication. In addition to his work with PYC, he plays the trombone in his school's band and is active in the College Access Program (CAP). He enjoys all things jazz-- JJ Johnson, Miles Davis, John Coltrane, & Kai Winding.